British automakers continue to dominate the ranks of Super Speed Friday with the 2012 McLaren MP4-12C.

McLaren Automotive was founded in 1989 and originally produced Formula One racing cars. They established a reputation early on for knowing speed in a way that not many other car companies did. McLaren’s first car was the F1, a 2 door coupe produced from 1992-1998. In March of 1998, McLaren’s F1 became the fastest road car in the world, setting the record at an incredible 231mph. It would be a decade after that before McLaren unveiled their next supercar, one solely designed and built by themselves. Development of the McLaren MP4-12C began in 2008 and the car made it’s first appearance in 2009. Although the MP4-12C has a very traditional sports car design, the tricks that lay within the frame are numerous and near-revolutionary.

As brainchild of noted car designer Frank Stephenson, the McLaren MP4-12C introduces some incredible new ideas and concepts to the supercar world. Most notably, the comfortability and handling have been improved in some rather remarkable ways. The number one thing that every reviewer has said about the McLaren MP4-12C is that it’s comfort level is unparalleled in the world of the supercar. In an industry with such strong competition (Ferrari, Porsche 911 Turbo), taking things to the next level is both encouraged and rewarded. When the MP4-12C was in development, McLaren had it in their collective minds to produce an automobile that would appeal to the consumer based on versatility. They wanted the MP4-12C to be seen as the blending of performance and everyday driveability, a car brought from the racetrack to the road.

McLaren also continues their tradition of blazing speed with the MP4-12C. It hits a top speed of 207mph, goes from 0-60mph in 3.1 seconds and boasts 592 horsepower, all while achieving the best fuel economy in its class. This incredible performance comes from the car’s twin-turbo 3.8 litre V8 engine. The shifting is controlled with a 7 speed dual-clutch transmission that is called the SSG or “Seamless Shift Gearbox”. This system has a truly unique feature in which the driver may pre-select a gear by gently tapping the shift paddle. I think that features which allow for advanced shifting are truly the future when it comes to the advancement of the supecar. Just as the MP4-12C has pre-selection of gears, the Ariel Atom 500 achieves its blazing speed with it’s advanced paddleshift system, allowing for 5 downshifts in less than a second. Control has always shined as a sought after commodity in the supercar world and it continues to be pushed to new heights.

Such an excellent super speed system is accompanied by an incredible suspension system. The advanced handling of the 2012 McLaren MP4-12C is made possible by a Proactive Chassis Control system (PCC) featuring Adaptive Dampening. This allows the MP4-12C to achieve an incredibly smooth and comfortable ride, along with optimal control, even at high speeds and over the most jarring of bumps. McLaren has also put in place a “brake steer” system. This system was originally used on their Formula 1 racing car, the McLaren MP4-12, but was banned because of it’s performance advantages. Brake steer was developed to improve traction on the MP4-12C and puts the brake automatically on the inside rear wheel while going fast around corners, severely dampening under steer. 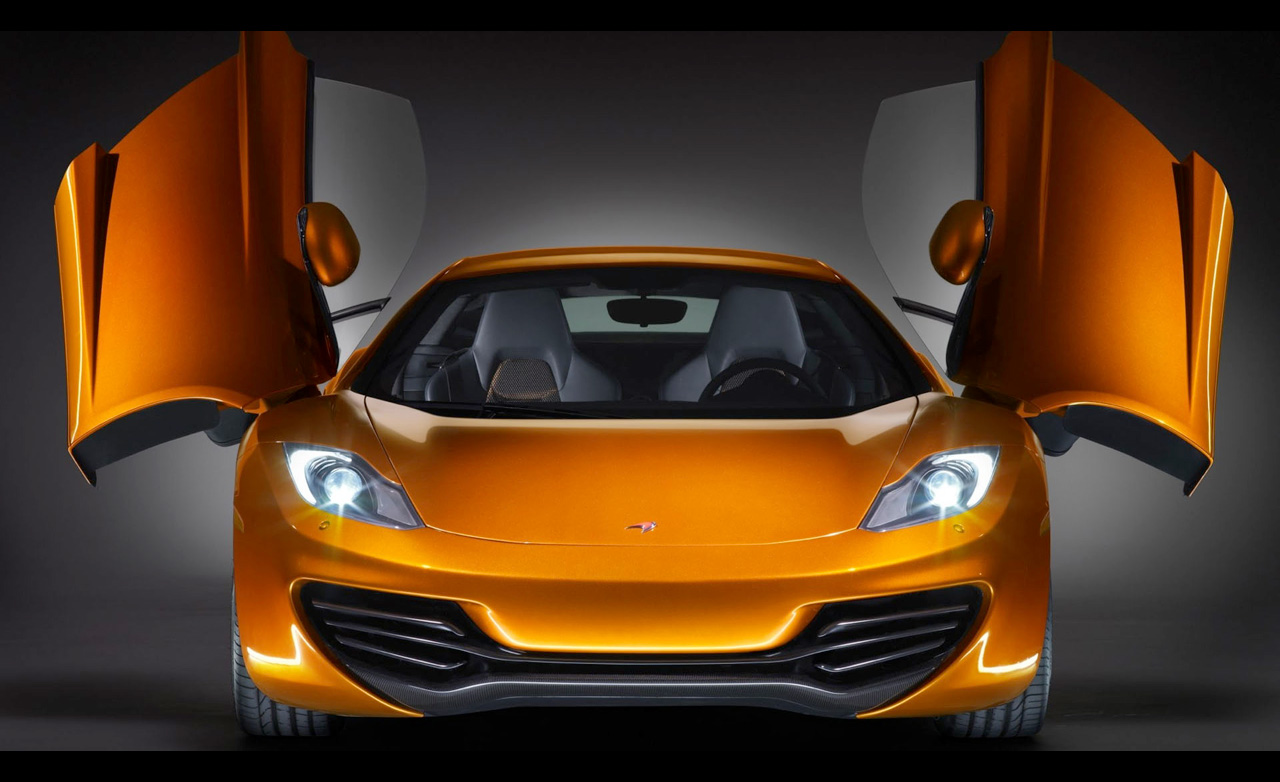 The design of the 2012 McLaren MP4-12C is largely traditional to the sports car look. It has a sleek, aerodynamic design, no doubt sculpted to perfection by a company known for such attention to detail. Even the door design of the MP4-12C enters some especially interesting territory. Although I am partial to gull-wing doors, I must admit, I enjoy the MP4-12C’s dihedral door setup. This “butterfly door” design is used often across the sports car world, from it’s induction with the ’67 Autodelta Alfa Romeo Tipo 33 to the 2013 Ferrari LaFerrari. The dihedral door design makes it easier to get into and out of the MP4-12C, yet another example of how McLaren is a master in car comfort.

The interior of the car bears the design of a Formula 1 race car. Although, unlike the McLaren F1, the MP4-12C features coupe style side-by-side seating, with the driver remaining close to the center of the car. All of the console controls are easily within reach of the driver, as well as the 7” telematics screen, which features bluetooth connectivity and voice recognition navigation technology. There is also a 4 speaker stereo with a USB port, iPod/iPhone integration, and speed sensitive volume control. Alloy and leather trim decorate the doors and center console, while several different colors and fabrics are available for the hand stitched interior. When I consider all of the points made throughout this post, how could the 2012 McLaren MP4-12C not make my Super Speed Friday list? Indeed, it belongs in the top 5.

Links to blogs about the McLaren MP4-12C

Wheels.Blog.Nytimes Review Of The McLaren MP4-12C

Techblog.com Review Of The McLaren MP4-12C